Married and No Sex?

A good friend, Jackie, called me this morning to report that another of her friends, Samantha, is fed up with no sex in her marriage.  Samantha has decided to divorce her husband after 17 years of marriage. Samantha, has only had sex 5 times with her husband in the last 11. Jackie pleaded with me, “What is going on? I know 5 women close to me, long married that want sex and are not having it in their marriages. Why?!” She continued, “To top it off, Samantha is gorgeous and super fit. What a waste!” 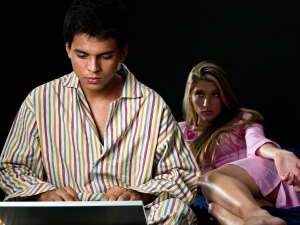 Aging? Routine? Boredom? Perhaps, but I highly doubt that any of that is enough to deter one from one of the most fulfilling exchanges with another – especially if you are living with him or her for the last umpteen years. I propose another possibility: The Inescapable Risk of Intimacy.

It can be a frightening adventure to let go to that grand, mysterious scape called Sexual Relating. Our old hurts and gaping insecurities, our accumulated resentments and untold truths and our unconfirmed suspicions of betrayal cannot hide in the nakedness of raw vulnerability, heightened physical sensitivity and razor-sharp intuition. There is the terror of losing oneself, the other or the shared lifestyle long settled in together.

So, I would ask Samantha what un-confronted demons are haunting her husband, Paul. Is he holding resentments or fears of not being good enough? Will the ultimatum of Samantha leaving Paul be enough to spur him to seek help to face them. Is Samantha leaving too early and avoiding her own issues by letting Paul be the identified avoider, proving that we always attract our reciprocal? Or is Paul clearly unwilling to heal and has Samantha finally faced her fear of the chaos of this inevitable ending?

Clarence pursues and his wife, Tammy, complains once again of that unrelenting headache. What risks of emotional intimacy are not being braved by either to pave the way for real relating? What wounds of Tammy’s past are unhealed and stubbornly interfering with her sexual flow? Is there a hidden agenda unconsciously serving Clarence to actually not get it on?

So, dear Jackie, no matter that Samantha is a 10. We are rich beings where one’s inner, ruthlessly authentic world overrides the totality of who we are. In fact it directs it all. This inner truth goes on strike or hides behind barriers of self-protection when it perceives threat – usually from the depths within. The answer? Deep work. Sometimes the only way we will engage in that work is if an ultimatum is presented and the potential permanent loss of our spouse is more overwhelming than the temporary loss of comfort to face and feel the painful. Counseling can lead to the necessary breakthroughs. Sometimes deeper therapeutic bodywork is also optimal so the long-held sense memory can be assured a safe venue to finally express itself in all its emotional, explosive colors. The pursuit is reputedly well worth it.

The beautiful irony is that once those inner precipices have been braved, the very courage  and headiness of risk re-ignites the life  force –  whether to stay and deepen strong intimacy or to finally leave and claim a passionate, authentic life longed to be lived.

Cyntha Gonzalez is a Human Relations Coach, Spontaneous Art Facilitator, Seminar Leader and Writer. She guides others to develop satisfying, emotionally intelligent intimate relationships. She is currently writing a book on her healing path of marrying and divorcing in the Sharia Muslim law. She lectures and teaches internationally. She is American born and has lived in the US, Latin America, Europe and now in the Middle East for the last 21 years. Cyntha has been also a guest blogger for www.oncloudzen.com. For more info, go to www.cynthagonzalez.com.
View all posts by Cyntha Gonzalez →
This entry was posted in Marriage, Psychology, Relationship, Sex, Women and tagged Emotional Intimacy, Marriage, Sexual Abuse, Sexuality, Women. Bookmark the permalink.

4 Responses to Married and No Sex?